The mission of Mu Phi Epsilon is to provide service to others through the art of music; to develop and nurture the potential leadership qualities of its members; to promote scholarship; and to encourage loyalty, inspiration and the very highest level of musicianship attainable. In its endeavor to share these gifts, it has gained status as a non-profit organization, which seeks to help young musicians who have taken on the serious undertaking of the study of music.

The New York City Alumni Chapter of Mu Phi Epsilon is committed to supporting its members as performing artists and presents concerts each year at Tenri Cultural Institute in Greenwich Village. This year will mark our fourteenth season at Tenri.

The NYC chapter currently pledges an annual grant to music schools in the New York area to provide tuition support for young, gifted musicians who demonstrate a significantly strong commitment to their course of study. Scholarship winners are presented in recital on the annual Founder’s Day concert. Each year we present one member in a solo recital as the chapter’s Distinguished Artist, and our year-end Artists in Recital features the chapter’s performing artists. All proceeds from Mu Phi Epsilon concerts are applied directly to the scholarship fund.

Mu Phi Epsilon, America’s oldest co-ed music fraternity, was originally founded as a Musical Alumni Sorority in Cincinnati in 1903 and the New York Chapter was founded in 1920. In 1977, Mu Phi Epsilon was reorganized as a co-educational Professional Music Fraternity and has since grown into an international organization with more than 75,000 members worldwide. Membership now includes over 70 alumni chapters with representative performers from every major musical institution throughout the world and is further augmented by over 100 collegiate chapters in the United States, the Philippines, and Canada. Among them are included: The Julliard School of Music, the Eastman School of Music, Indiana University, the New England Conservatory, the Peabody Institute, Lawrence University, Northwestern University, Boston University, the University of Maryland, and the University of Michigan at Ann Arbor.

Please join us in our celebration of Beethoven’s 250th with an exciting program of works by “BEETHOVEN” as well as Chopin, Dutillieux, Haydn, and Scarlatti!
Hope to see you there!!

Please join us at our final chapter recital! 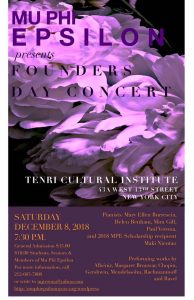 Join us for our final concert of this season in performances of intimate and soaring piano music, thrilling art songs, and extraordinary operatic arias! 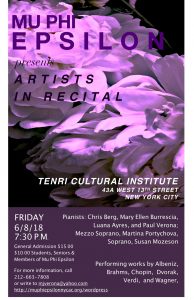 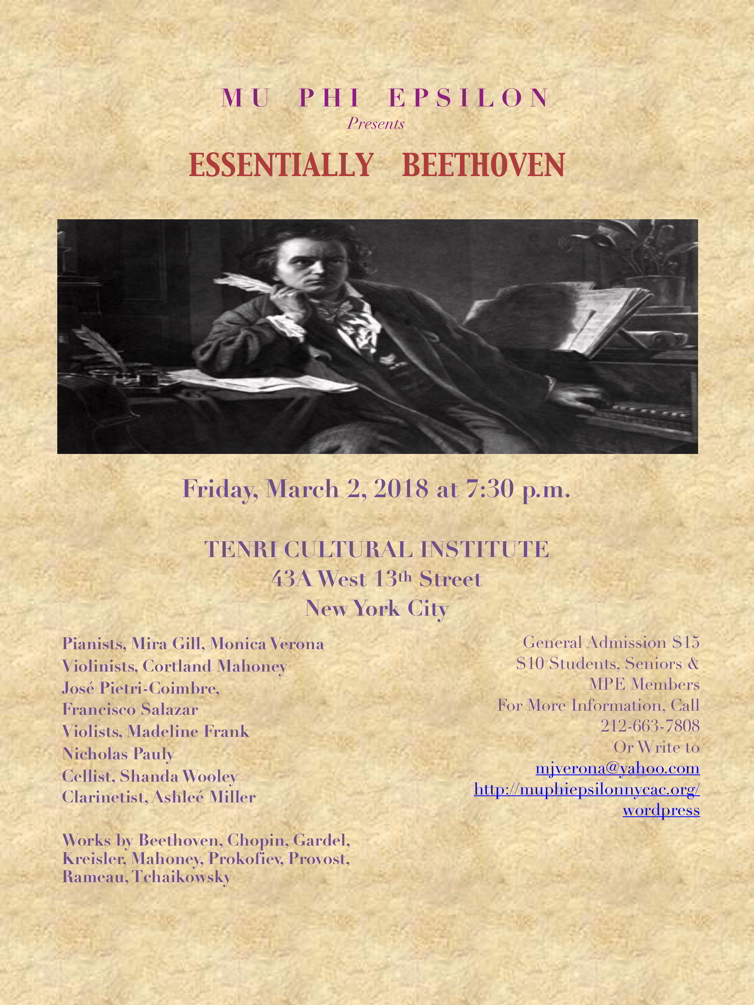 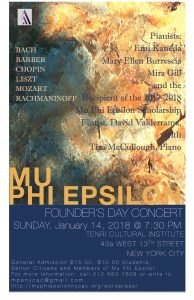 We end our season with the annual Artists in Recital concert. See poster for details. Please remember that all of our proceeds goes towards our scholarship fund which assists in instrumental instruction for worthy young musicians in the New York City Metropolitan Area. We hope to see you at the concert! 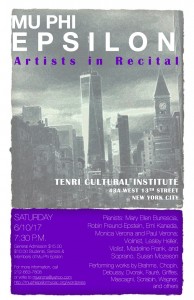 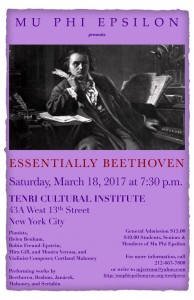 The New York City Alumni Chapter is pleased to announce its next concert, “Essentially Beethoven” at Tenri Cultural Institute on Saturday, March 18, 2017 at 7:30 p.m. See attached flyer for details! Hope to see you there!

The New York City Alumni Chapter of Mu Phi Epsilon is committed to supporting its members as performing artists, and grants an annual scholarship to young, gifted musicians.